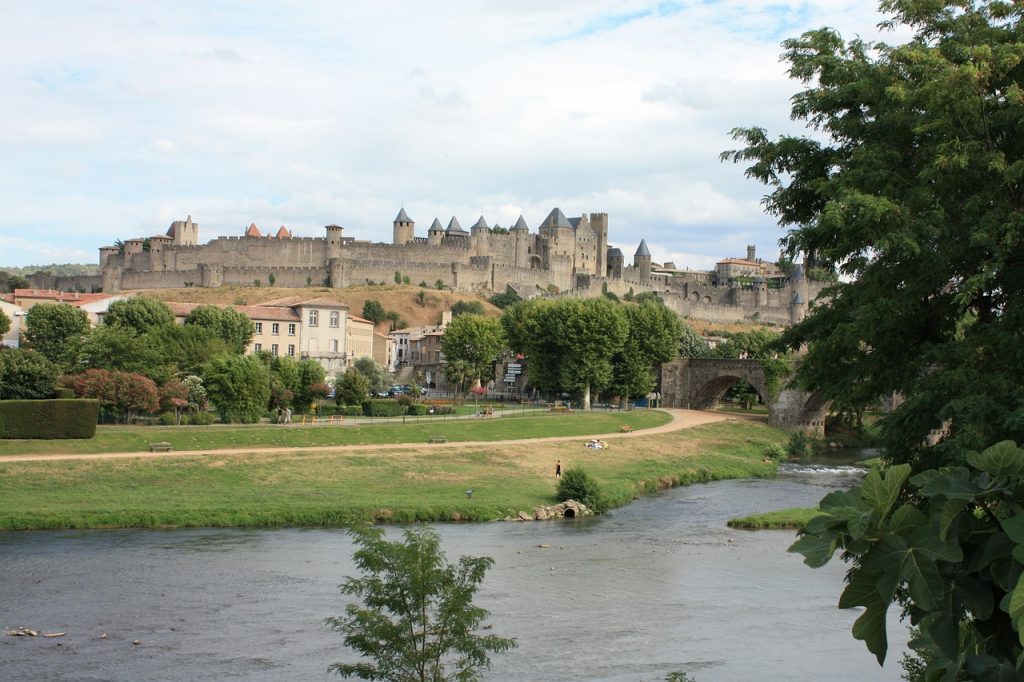 These charming French villages look like they’re straight out of a fairy tale.

France, the most popular tourist destination in the world, has plenty to offer. Apart from Paris or the glamorous French Riviera, picturesque medieval villages are a must-see while traveling in France. These flower-rich walled towns with cobbled streets and old stone houses will definitely take you back to medieval times.

From the largest walled city in Europe Carcassonne to Perouges often used as a setting for historical movies, here are 5 the most beautiful French medieval villages. 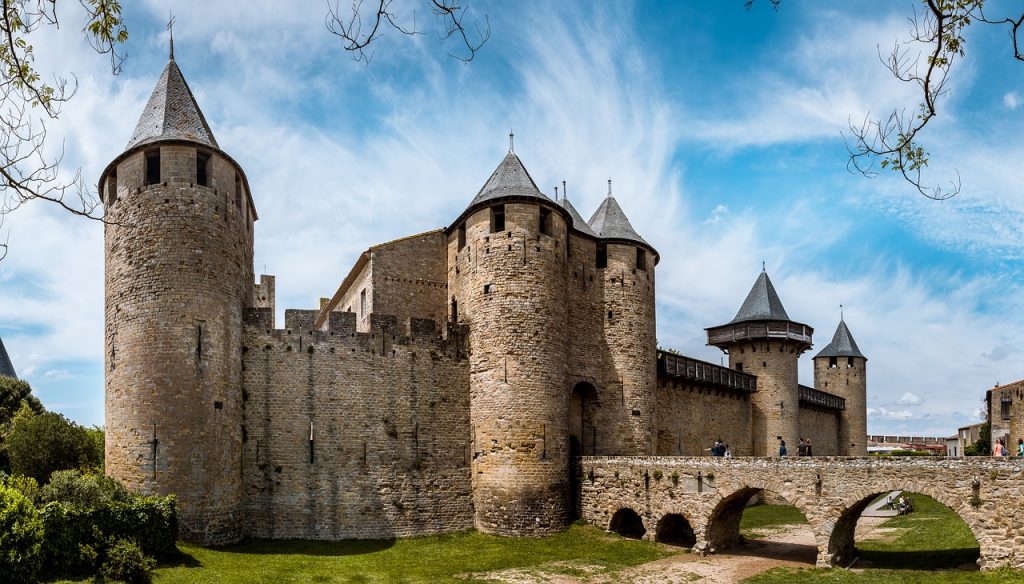 Carcassonne is the largest preserved walled city in Europe. Photo courtesy of Pixabay

Perched on a hill Carcassonne looks like a huge fairy tale castle. But what looks like a castle from a distance, actually is the largest preserved walled city in Europe. The fortified upper town, known as the Cité de Carcassonne, is surrounded by two walls with 52 towers. The outer wall was built in the 13th century while some parts of an inner wall date back to Gallo-Roman times in the 3-4th century. 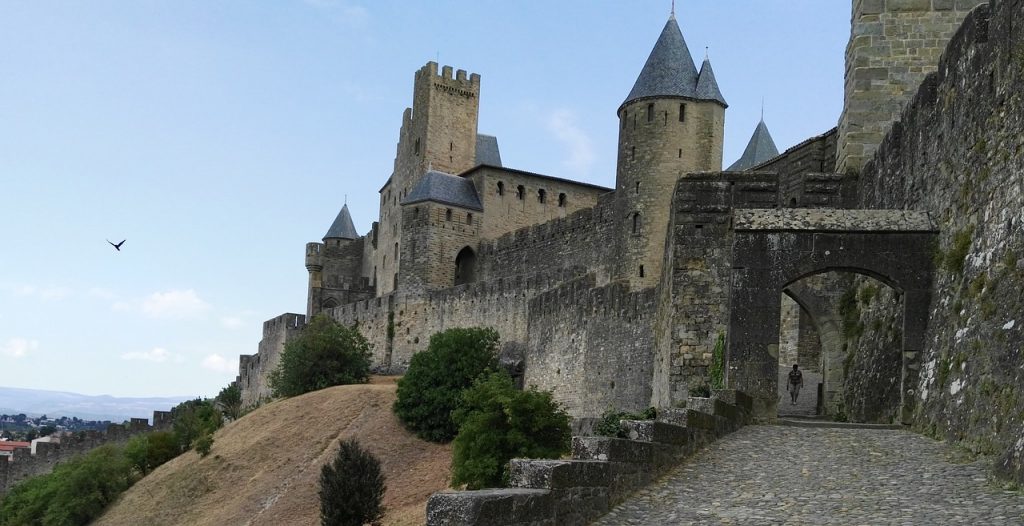 Strolling in cobbled streets of medieval Carcassonne, tasting a traditional dish cassoulet, relaxing in one of a few lush squares, observing city walls or buying a wooden sword and shield for your kid in a souvenir shop, are among the best things to do in this city.

However, a fine Comtal castle standing within a walled village offers the most impressive attraction in this town. Visitors can take a walk on the ramparts surrounding the city.

Although this walk is not the easiest one because of steep steps, it’s the best way to admire the majesty of Carcassonne and spot details that would otherwise be hidden from tourists’ eyes. 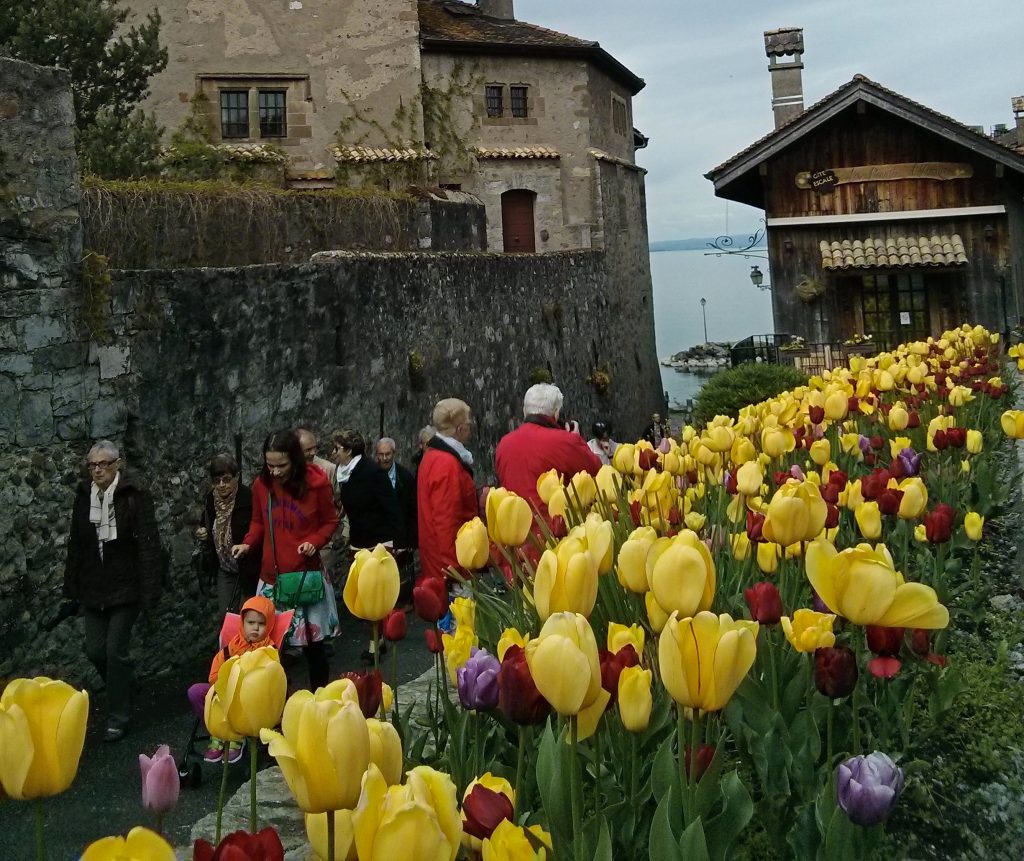 Situated on the shores of Lake Geneva, Yvoire is one of the hidden gems of France. This charming village managed to preserve well its medieval look. It’s easy to fall in love with cobbled streets, well maintained old stone houses covered with climbing plants, a historic castle and a view of snow-capped mountains on the other side of the lake.

This tiny village is filled with flowers, thus it is especially worth a trip in spring when tulips and narcissus are blooming on every corner.

The Garden of the Five Senses is one of the main attractions in the village as it aims to awake all five senses. Designed as a labyrinth it consists of eight gardens highlighting the odors, textures, flavors and other aspects of the plant world. 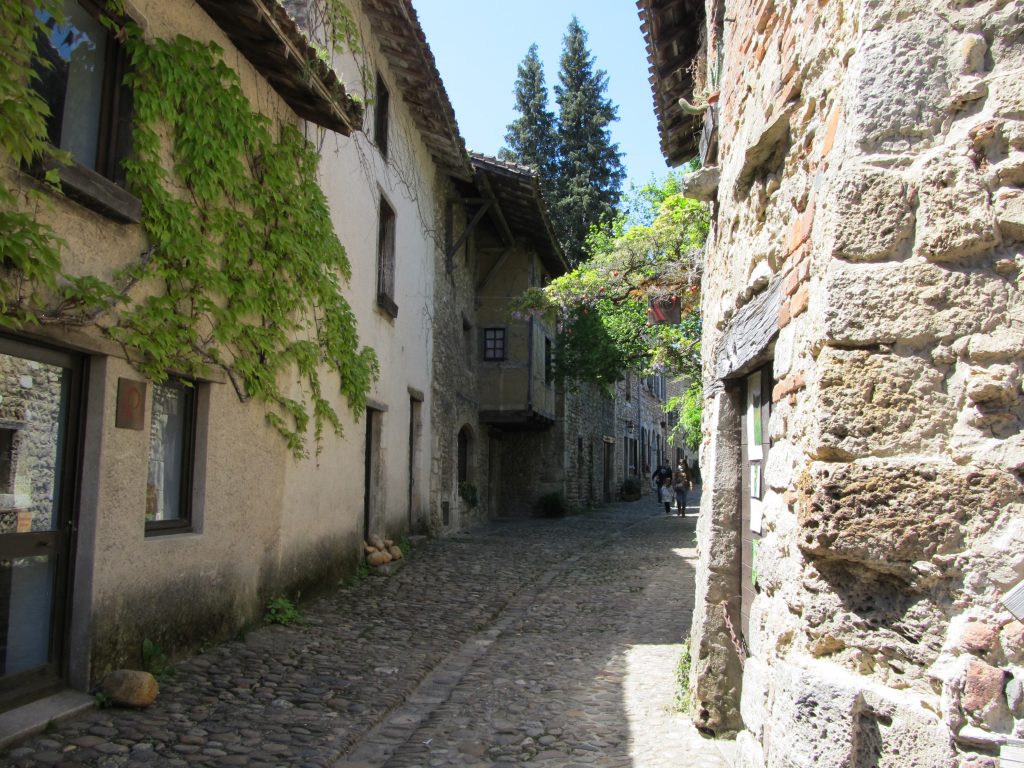 This hilltop walled village looks much like it did 600 years ago. Narrow cobbled streets lead past a fortified church and the house of the Princes of Savoy, nice squares, and lovely cafés, several art galleries and workshops open for public, and a 200-year-old tree planted shortly after the French revolution.

Given this authentic atmosphere, it is hardly surprising that Pérouges became a popular setting for historical period movies. Les Trois Mousquetaires  (Three Musketeers) and Fanfan la Tulip are among the most famous that were filmed here. 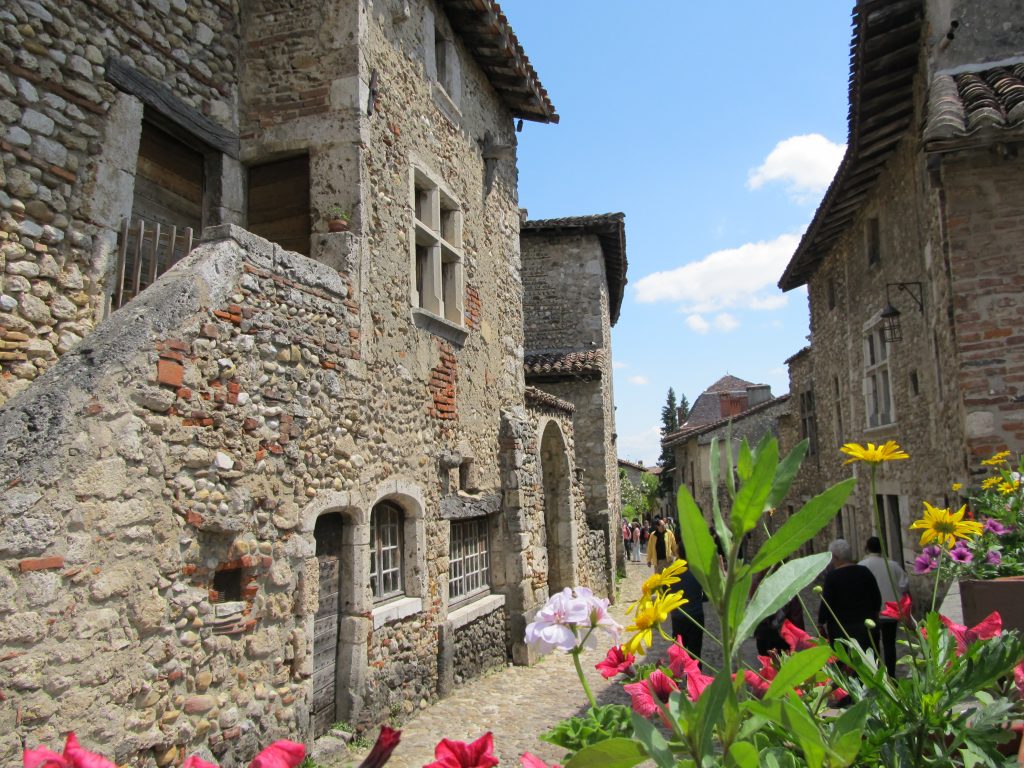 However, Pérouges is not as polished as some other medieval French villages. Some of the old town streets remain quiet with seemingly empty houses and walls asking for a bit of a renovation. On top of that, souvenir shops haven’t occupied every single ground floor of the buildings in Pérouges just yet. 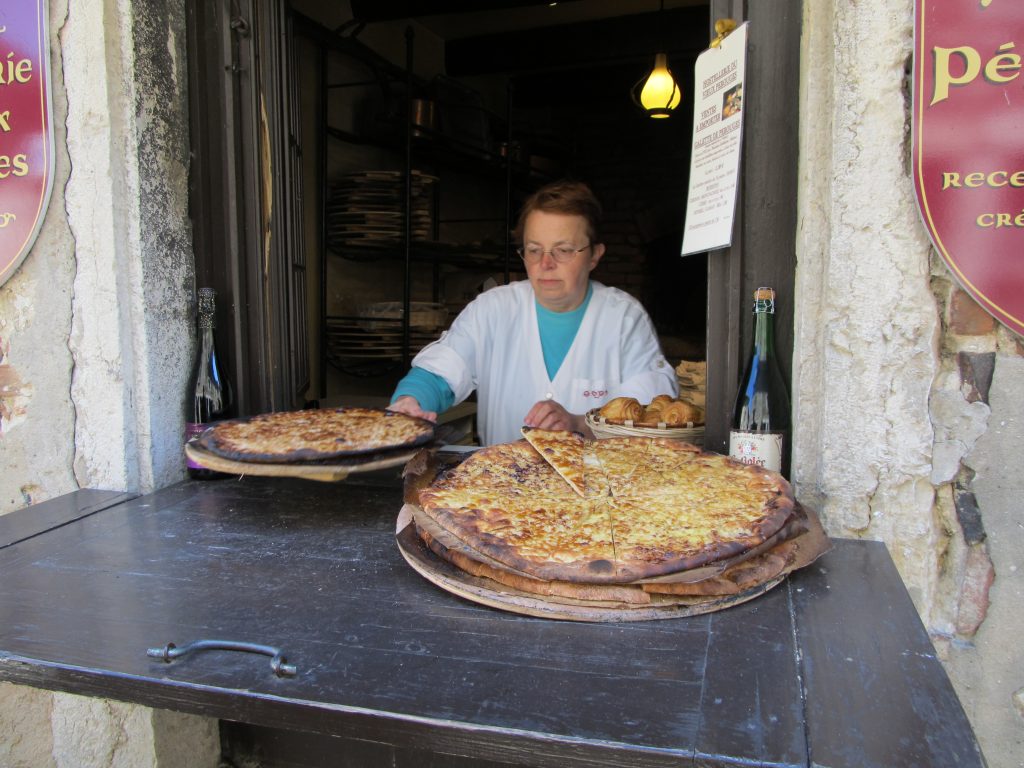 Galette of Pérouges is a traditional pastry of this village. Photo: Jurgita Simeleviciene/Business Fondue

Pérouges is also famous by Galette of Pérouges, a culinary specialty. Round-shaped dough pastry baked with a topping of sugar and butter is sold only inside this walled town. Several bakeries offer this pastry which was created in 1912 and became one of the tourists’ attractions. 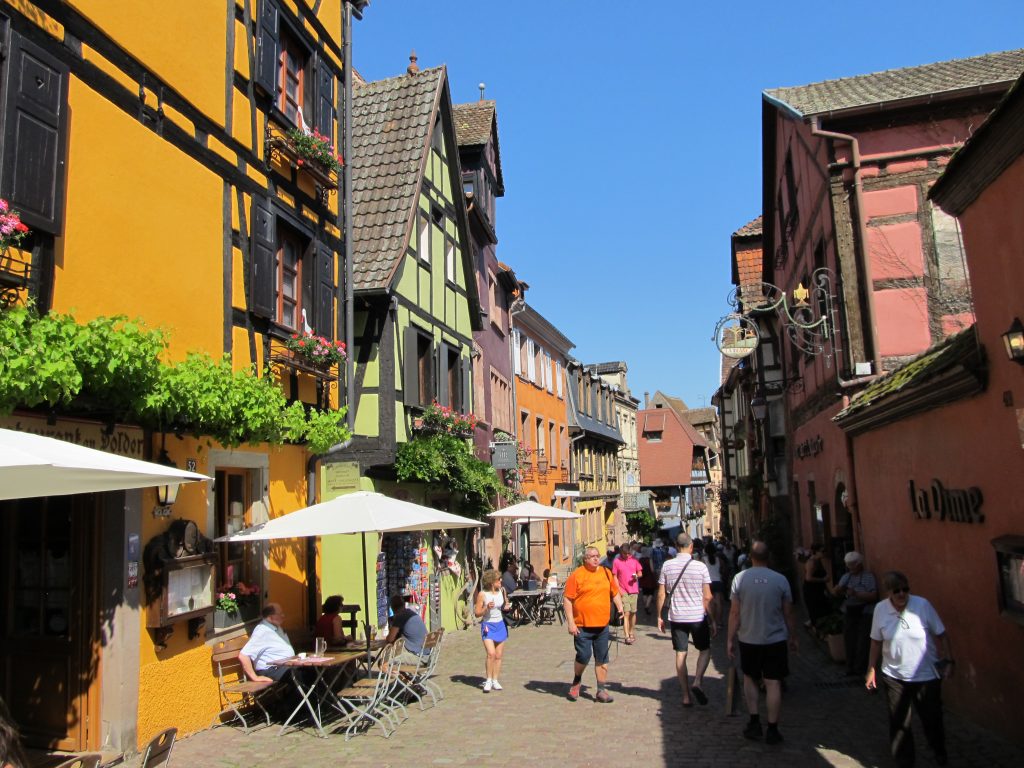 A colorful medieval village surrounded by vineyards is probably the prettiest town in Alsace. Green, yellow, red, blue, orange half-timbered houses, decorated in flowers might leave you feeling like you’ve walked right into a fairy tale.

Situated on the famous Alsace wine route, which leads through dozens of picturesque medieval towns, Riquewihr is a great place to sample a wine from this region. Among other things to explore are the Dolder, a 13th-century defensive gate, numerous fountains and Tower museum of thieves with a torture room.

A little tourist train takes passengers outside the village, up in the vineyards, to enjoy great vistas over the town. 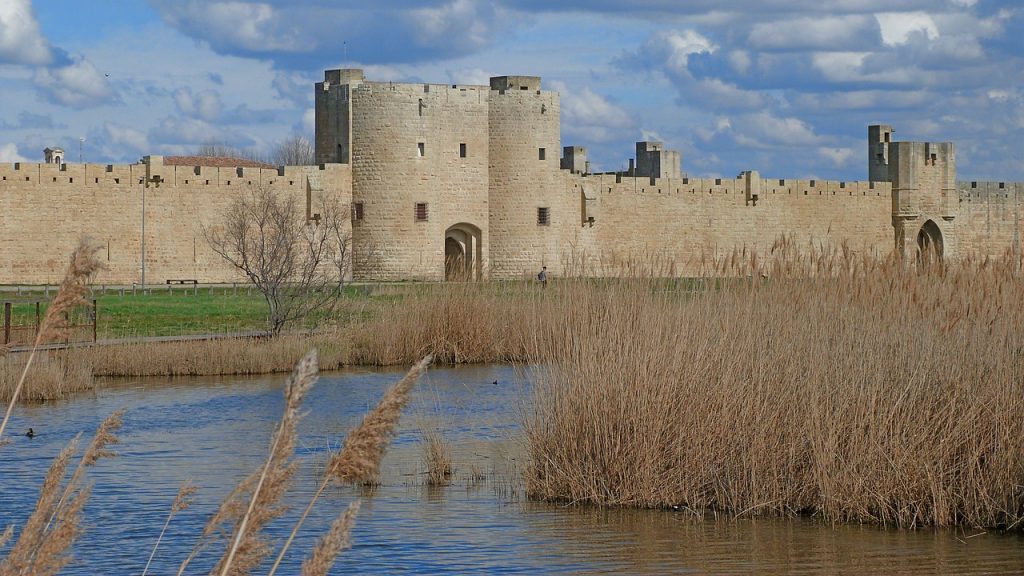 Located close to the sea and surrounded by impressive saltwater lagoons, Aigues-Mortes is a charming walled medieval village filled with restaurants, lovely cafés, and shops. Before indulging in a nice dinner, it’s worth taking a walk on the ramparts around the entire village.

A little tourist train takes passengers not only on a tour within the walled village but also outside the wall.

For those who are seeking a unique experience, Salin d’Aigues-Mortes organizes a tour on a miniature train around the largest Mediterranean salt marsh. The tour also includes walking up a salt mountain.