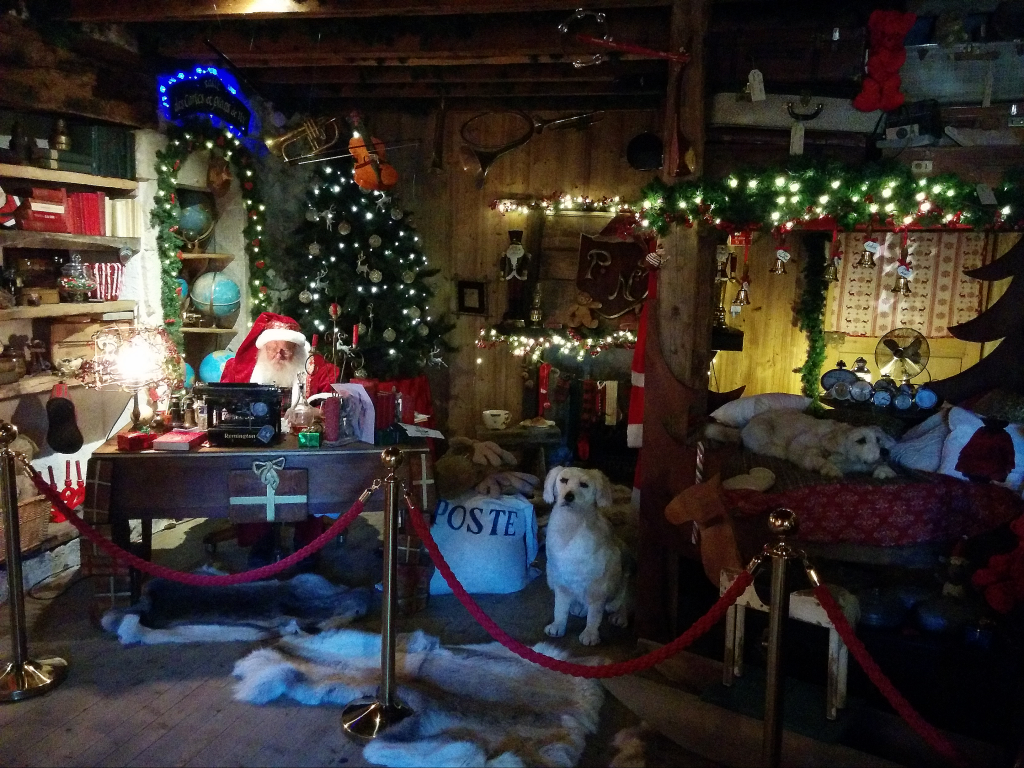 Whether you are three years old or 73, visiting a Santa Claus village and meeting the beloved Christmas character is always an adventure.

In Europe, there are several places where your biggest childhood dream may come true. Although the crowds are mainly hitting Santa Claus villages in December, some of these places are open all year round. 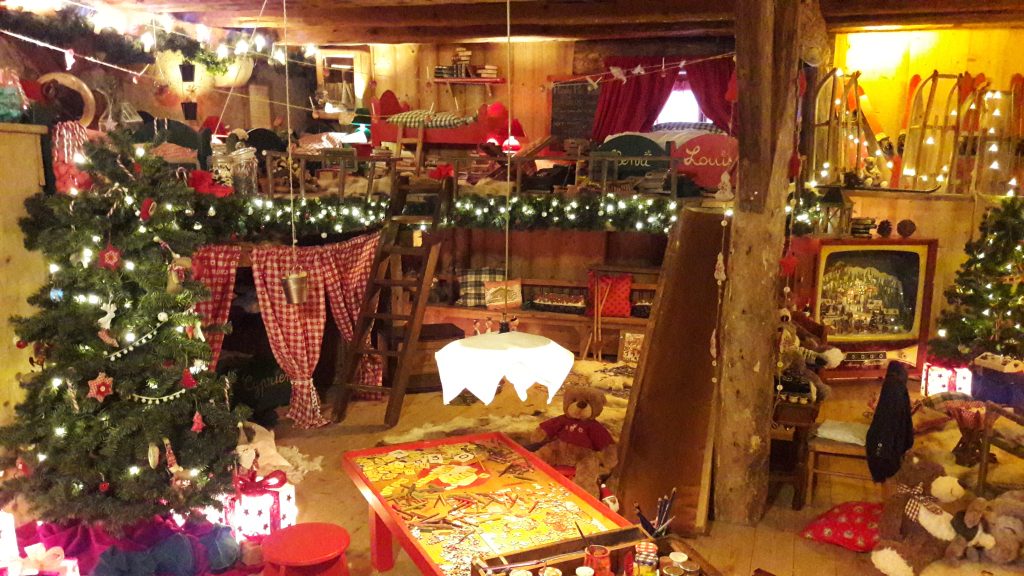 In this bedroom elves take a rest after a hard day of manufacturing toys. Photo: Jurgita Simeleviciene/Business Fondue

In this Santa Claus village (Col du Mont Sion) you might miss the snow, but you’ll definitely find the Christmas spirit.

Situated just a 15-minute drive by car from Annecy, and a 20-minute drive from the Swiss city, Geneva, the Santa Claus village welcomes those who are eager to find out more about Santa’s daily life.

This Christmas kingdom features several buildings. The main is dedicated to Santa Claus and his little helpers, the elves. Once you enter the house, you’ll be welcomed by Christmas carols, garland lights, various Christmas trees, and cozy artificial fireplaces.

A journey through this magical place begins in a spacious dining room. Visitors can walk around a Father Christmas table set for dinner, take a peek into a kettle cooking on a fireplace and study the content of cupboards. 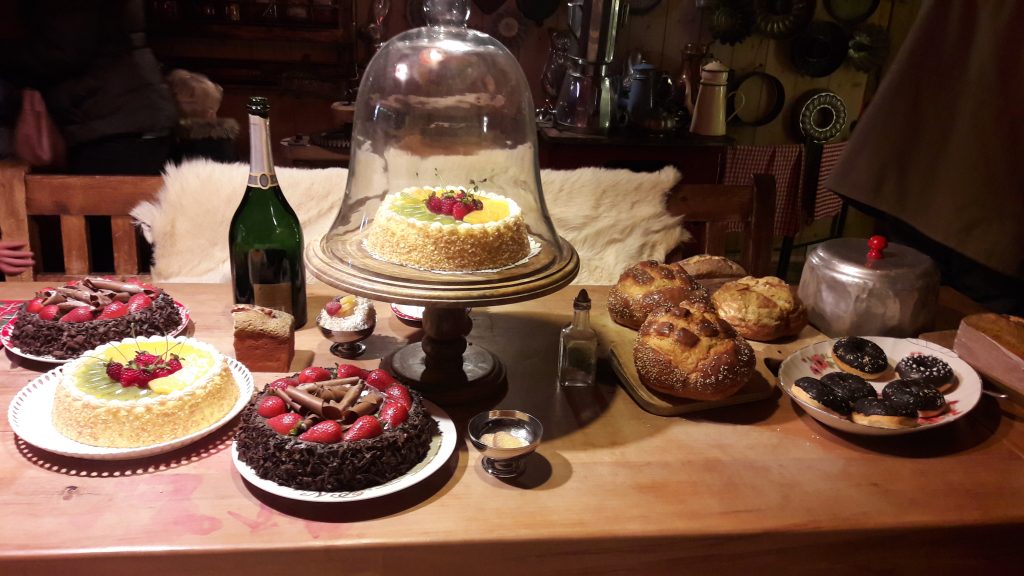 The tour continues to the elves’ living room decorated with tiny armchairs and shelves full of jars. Even more impressive is an elves’ bedroom furnished with miniature beds. Here Santa Claus’ little helpers take a rest after a hard day of preparing gifts for children.

Probably, the most important room is a toy factory where the main action takes place before Christmas. 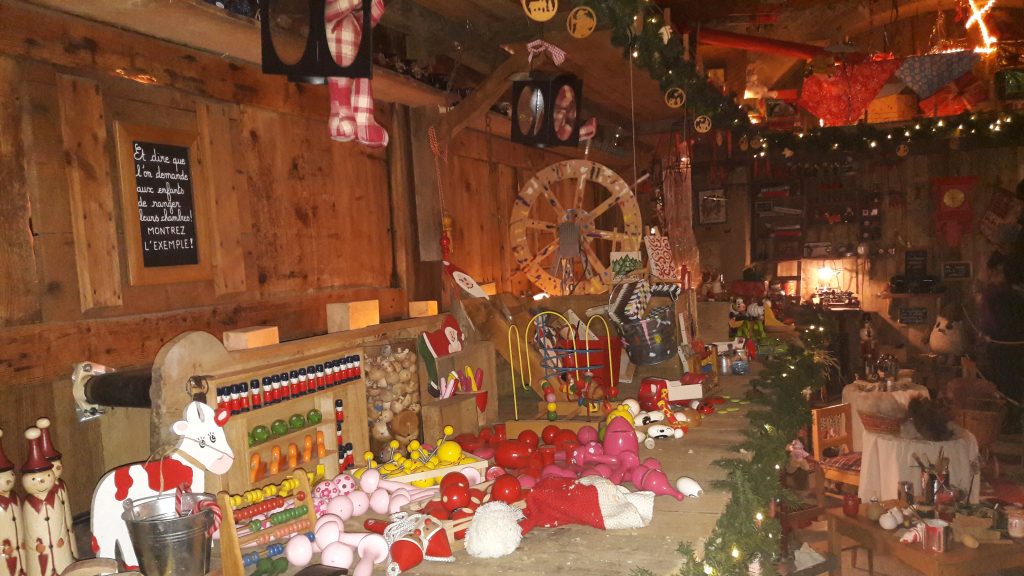 Various toys are being made in the factory of elves. Photo: Jurgita Simeleviciene/Business Fondue

Thousands of toys are being made in this room, including trains, cars, soft puppies, little soldiers, wooden houses and ships. Little conveyors take newly made toys upstairs where they are wrapped in a gift paper. Finally, they are transported to an attic to wait for Christmas Eve.

The main prize awaits you at the end of the visit. If you are lucky, in a bedroom where two soft dogs are waving their heads and tails, Santa Claus himself will greet you and wish you a Merry Christmas. However, in a high season Santa Claus usually waits for children in a garden of elves. There little visitors can take a photo with the host of this village. 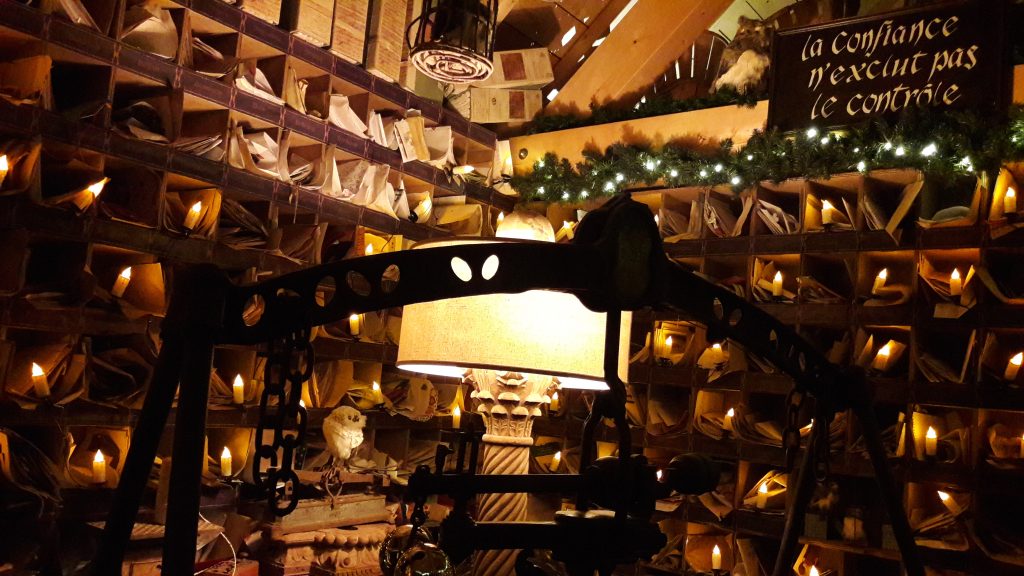 No wonder that Father Fouettard prefers to dress in grey, black and violet colors. He points out to Santa Claus naughty children and sometimes even confiscates their toys. The collection of confiscated things from famous historical figures like Salvador Dali or Napoleon, as well as a pile of confiscated Nutella jars can be seen in Father Fouettard’s house.

That’s far from all the attractions offered in this Santa Claus village. Among other activities, there is the possibility to send a letter to Santa Claus and get his response, listen to Santa’s sister, Mother Christmas, stories in her living room, or enjoy a crepe and a glass of hot wine. 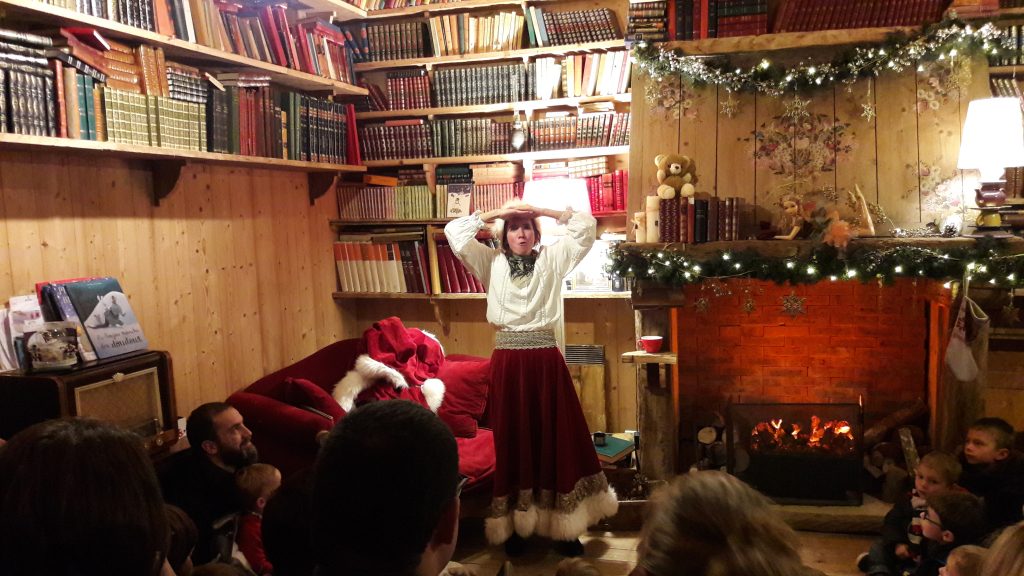 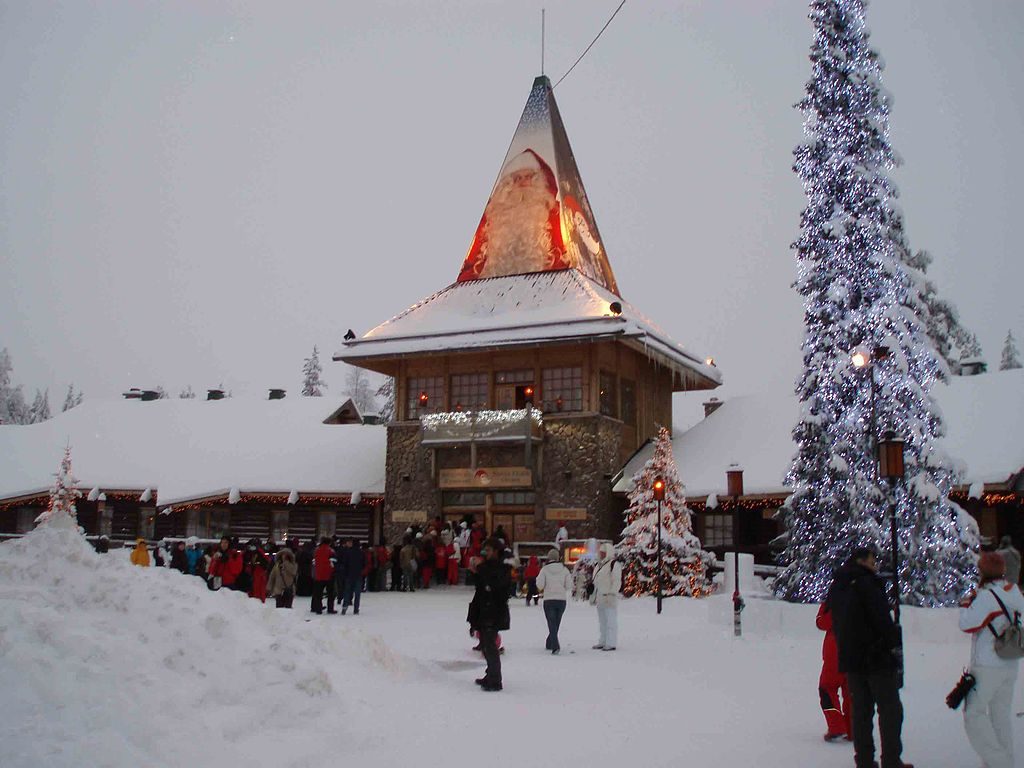 Santa Claus has been welcoming guests for 30 years in Rovaniemi. Photo: Wikimedia

The best-known Santa Claus village in Europe lies on the Arctic Circle in Lapland, Rovaniemi (Finland).

This village has been the official home of Santa Claus for more than 30 years and is open to visitors every day of the year. No wonder it draws crowds looking for a festive mood, especially in winter when snow covers the village in white.

The most popular attraction among children, as well as grown-ups, is a several-minute meeting with Santa Claus in his office.

After passing a gigantic wheel machinery and sitting in a waiting room (in winter the queue could be huge), a visitor is invited to enter Santa’s office. Every meeting with the jolly man in a red suit is streamed online. The session ends up by taking a picture with Santa Claus, which you can purchase later.

The village also features Santa Claus’ post office, where you can order a Santa’s letter to be sent to your home, gift shops, restaurants, the symbolic line of the Arctic Circle and plenty of other attractions.

In winter, a drink in an ice bar or a night in an igloo hotel might be an unforgettable experience. While those looking for adrenaline-driven activities can try a ride in a reindeer or husky sledge. 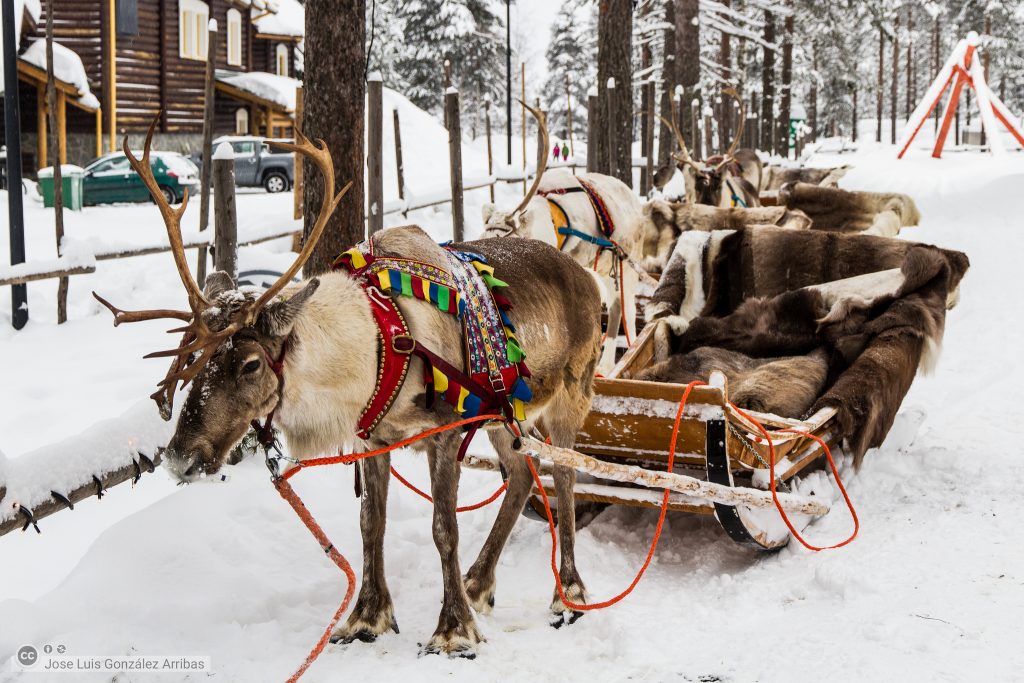 Although the main Santa Claus’ house looks more impressive, the second one is closer to a parking lot.

The second Santa’s house looks more modest, but it hosts a Christmas-themed exhibition, showing in detail Christmas traditions around the world and centuries-old toys. However, the highlight of this visit – a meeting with the second Santa Claus is, basically, limited to posing for a picture.

Both Santa Claus’ offices and exhibitions are for free. Visitors need to pay only for additional services, like ordering a letter for Christmas or a photo with Santa Claus. 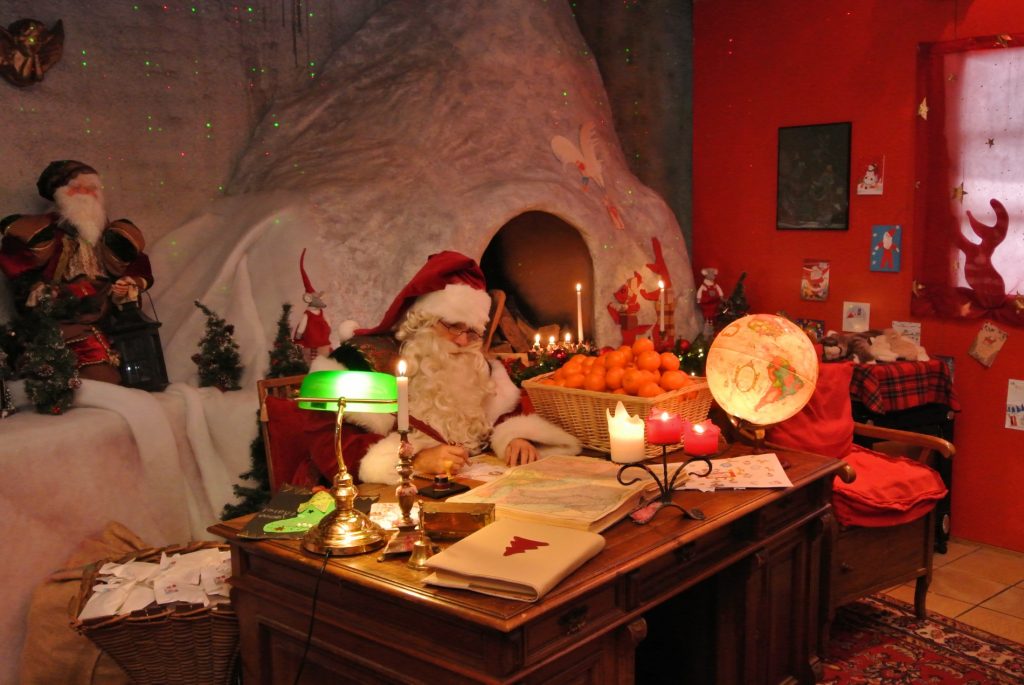 Apart from Santa Claus villages that are open all year round, smaller Father Christmas residences invite visitors just before Christmas.

Every year from the end of November to Christmas Eve a Santa Claus’ house opens its door on the top of Rochers-de Naye mountain in Switzerland.

Visitors must take a cogwheel railway from Montreux to get to this residence. Santa Claus’ house is tucked in a grotto at a 2-kilometer height and overlooking Lake Geneva. 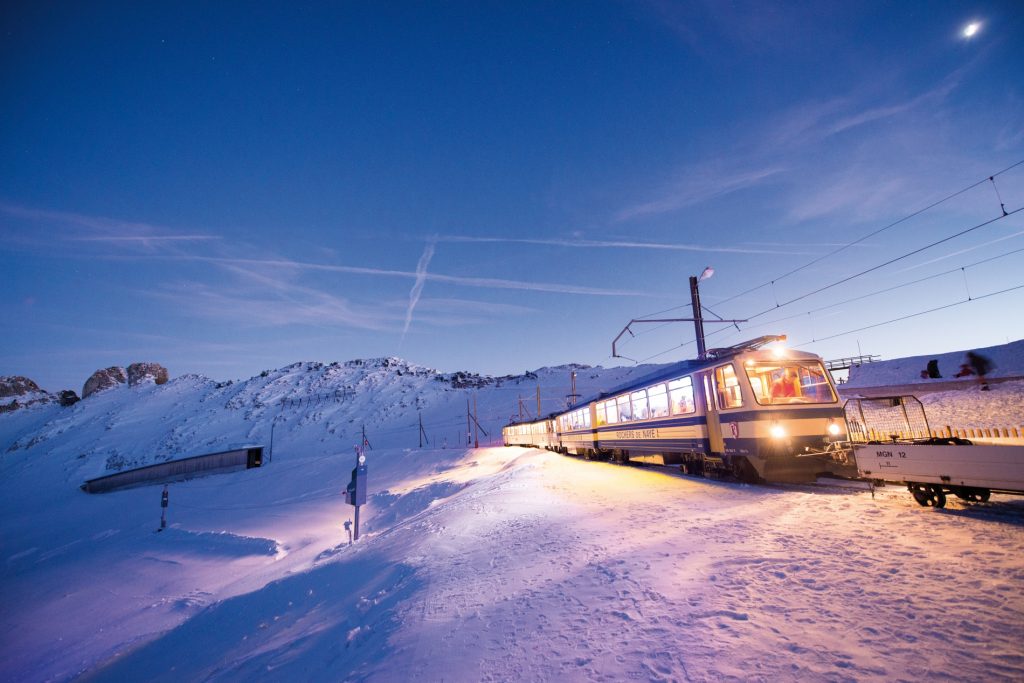 The train takes visitors to the house of Santa Claus. Photo courtesy of Montreux Noël

A train-ride in the mountains covered by snow is an adventure in itself. Additionally, Santa’s guests can expect a photograph with the host himself, face painting for children, a drawing competition, a lively Christmas market and plenty of snow. 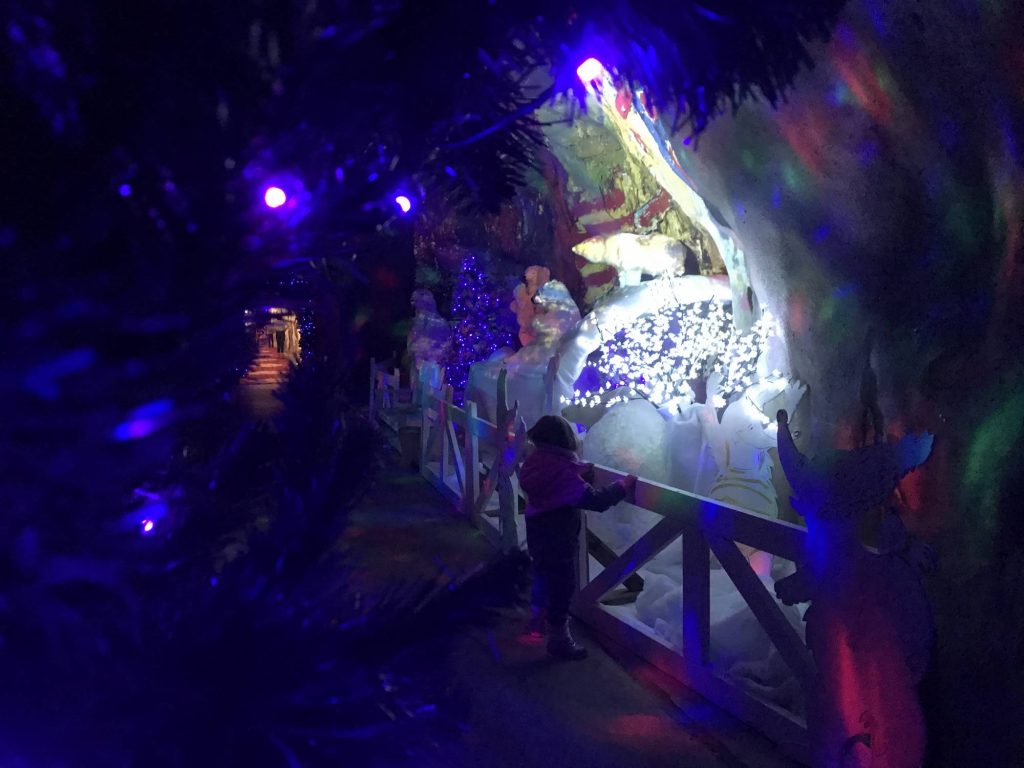