Here’s how the national dish looks like in different countries 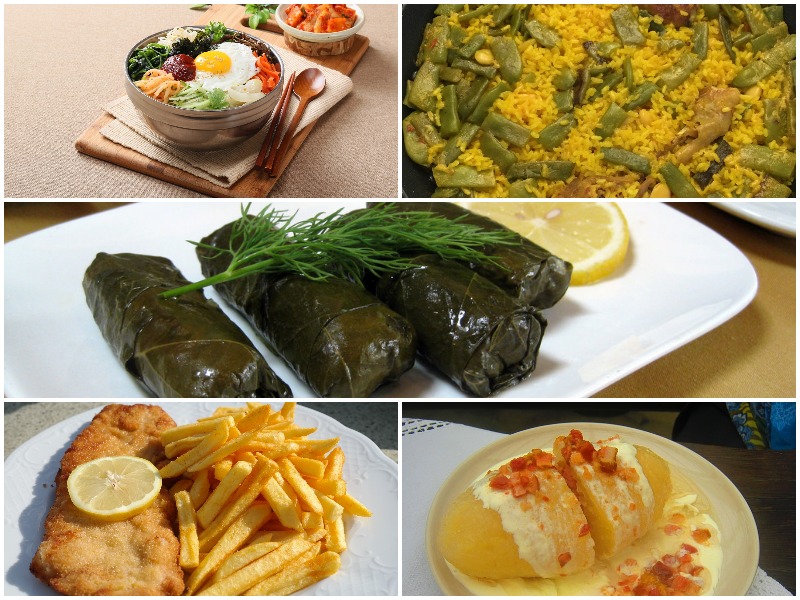 Business Fondue asked 10 people from 10 different countries to name a national dish that best represents their country. Here is what they chose.

When it comes to traditional food, we can’t differ more. A national dish became an essential part of a country’s identity as it represents its history, culture and a local taste. Not surprisingly, a tasting of national dishes became a must-do thing while visiting a foreign country. Whether it is something we could easily introduce in our own cuisine or something too exotic for our taste, we want to try it nevertheless in order to understand better a country we are visiting.

Although many nations have a handful of popular regional dishes that vary from city to city, some dishes could be found across all the country and are associated with a country itself. It is a dish that locals recommend to tourists or bring to international dinner parties.

“Business Fondue” asked 10 people from 10 different countries to name a national dish that best represents their country. Here is what they chose. 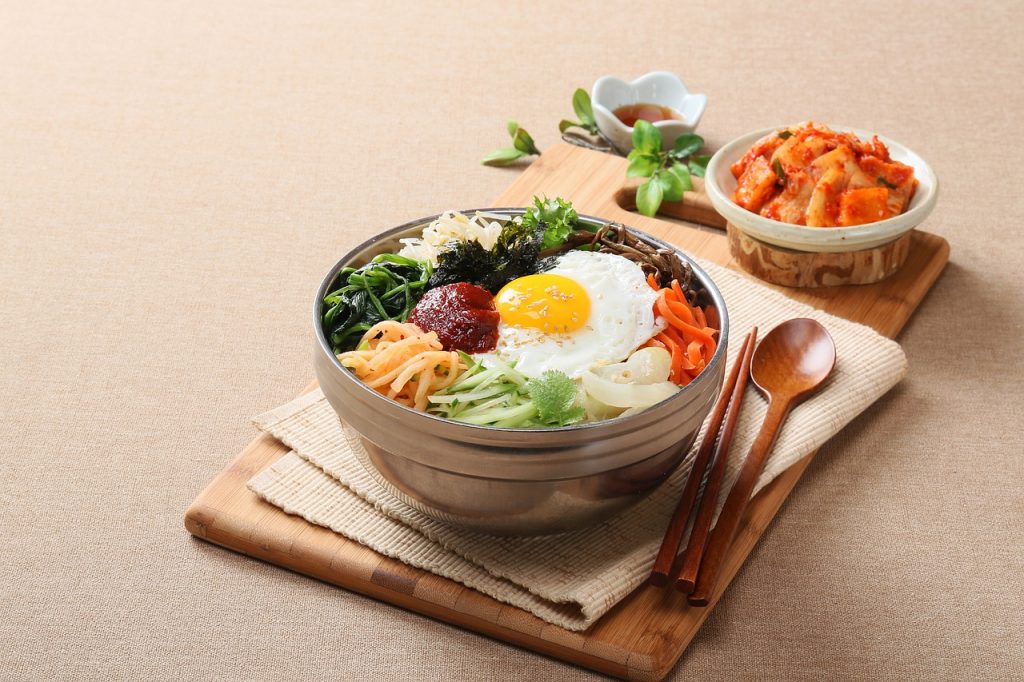 Minjung Park: “Essential parts of this dish are rice, an egg and a very spicy sauce gochujang (Korean chili paste). According to your taste, you can add meat and different vegetables. It’s easy to prepare bibimbap as you can put everything you want. I make this dish at least once every two weeks as both me and my husband like it, so do most of Koreans. Actually, Europeans like it too once they try.

I have been eating bibimbap all my life as my grandmother and my mother used to make it very often. I also ate it at school, because bibimbap is so popular that you can order it during the lunch.” 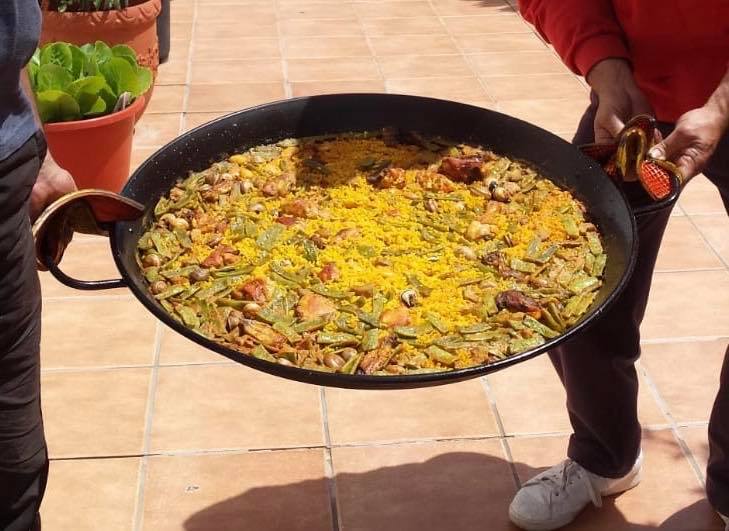 Dr. Carlos Solans: “Many variations exist of this dish: chicken, rabbit, seafood or fully vegetarian paella. It can be even topped with green peas. The truth is, each one has his favorite one. To me, the chicken with rosemary is definitely the best. Just add some rosemary leaves while you are boiling the chicken and you’ll get an extraordinary flavor.

I used to eat paella every time we got together with my grandparents for a Sunday lunch. My father has cooked this dish for as long as I can remember, always saying it is the dish a gentleman should cook for his family. He taught me how to cook it on a fire, although now I cook it on an electric stove at home. I prepare paella with the help of my family every Sunday when we have a chance. My daughter loves it, and I enjoy cooking it.” 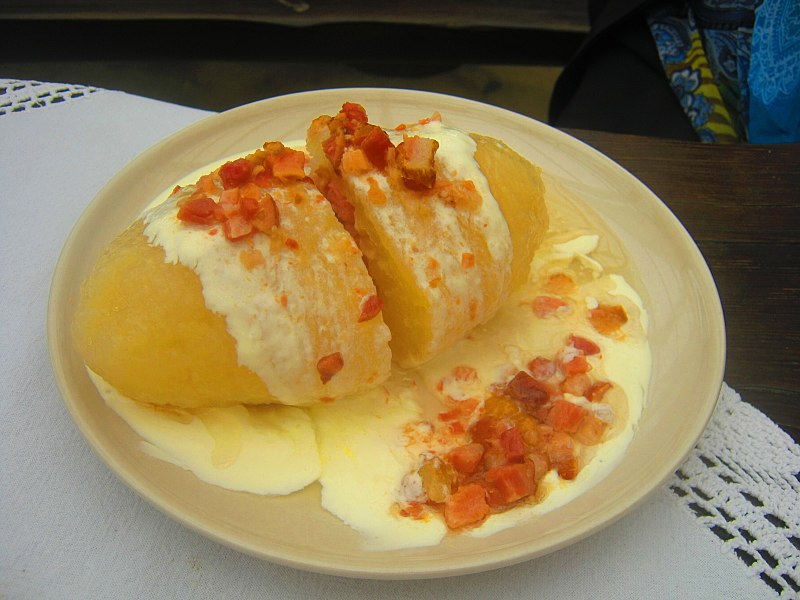 Lina Melninkaitienė: “When I am contemplating about numerous Lithuanian national dishes, normally one word pops-up to my mind – cepelinai (potato-meat dumplings). It is the dish that I eat every time I go back to my homeland as I live abroad now.

Normally, I eat cepelinai at a restaurant as it takes quite some time and know-how to make it. Since I am not the best at cooking (a contrary, to be precise), I’ve never learned how to do it to perfection. It is actually quite a heavy and greasy dish consisting of meat and potato purée and served with a bunch of bacon bits on it. It’s a nice recipe to survive long and cold Lithuania’s winters that last from the end of autumn till mid–spring.

Honestly, I can remember eating it quite often and as long as I can remember myself. My granny was making those funny looking super tasty cepelinai throughout my childhood. Normally, people would prepare it for birthdays, Sunday lunches, etc. I guess this explains this sweet connection we build with this dish.” 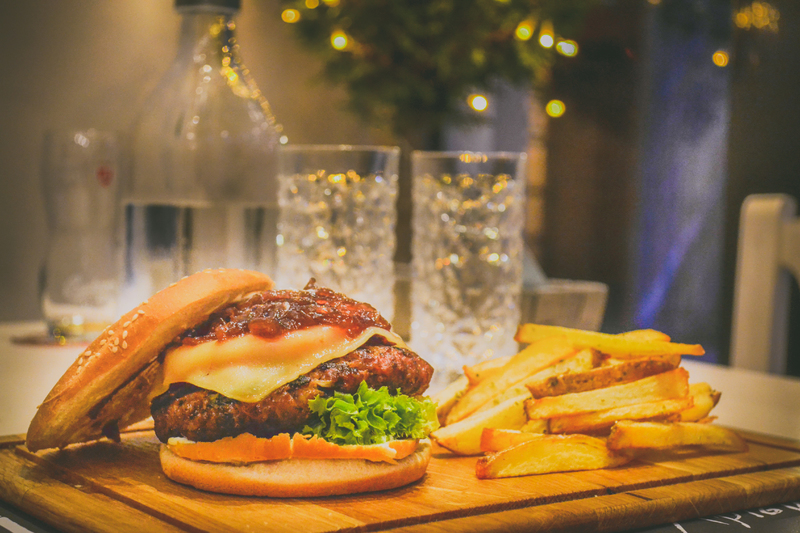 Jenny Stergiou: “Everyone knows how to make cheeseburgers, and many people have something special they like to add on or mix in, like barbecue sauce, spinach dip, bourbon, garlic powder, mustard, onions, etc. This is a common, everyday food, but I associate it with summer barbecues. I like it, and have been to the restaurant in New Haven, Connecticut where it was supposedly invented. However, the original was plain ground beef, cooked very rare (still bleeding) for most Americans’ taste, between two slices of bread. I did not like that. The modern cheeseburger has cheese of course, but also is better seasoned and served on a bun, usually with some combination of sauces including ketchup and/or mustard, and with garnishes like pickles, lettuce, tomatoes, onions, bacon, avocado, or mushrooms. You can get one from one of the many drive-through windows in the US.

The cheeseburger is eaten everywhere across the US. People like its simplicity, convenience, and deliciousness. It is a safe food to serve a crowd because virtually everyone likes them. There are even vegetarian options. So in a place like the US where people come from different culinary backgrounds, and preferences vary widely, people like the customizable nature of the cheeseburger.” 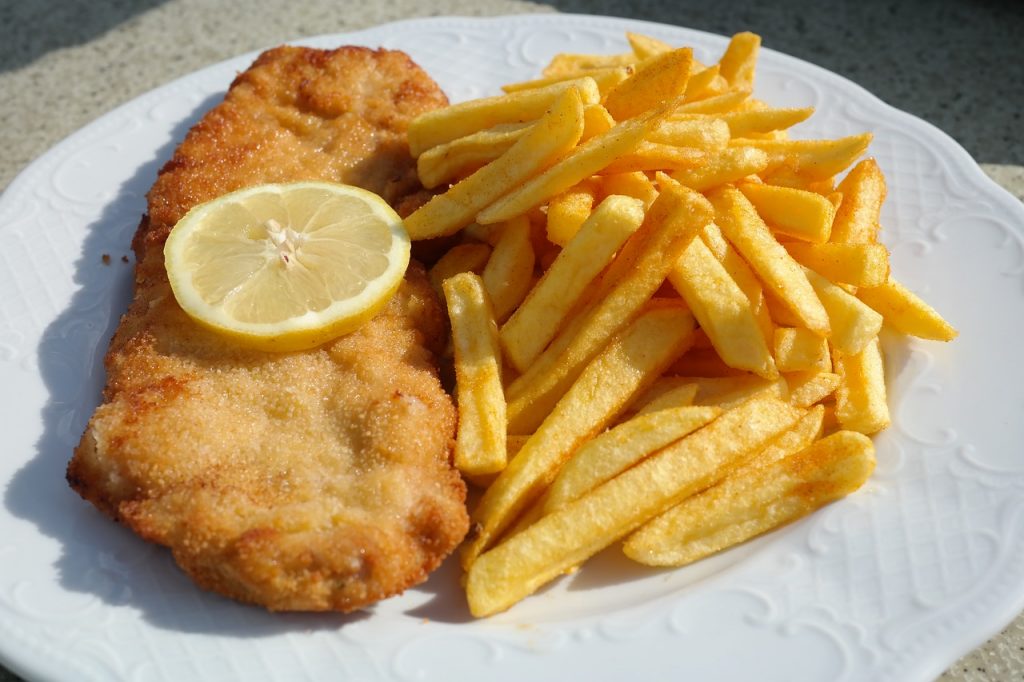 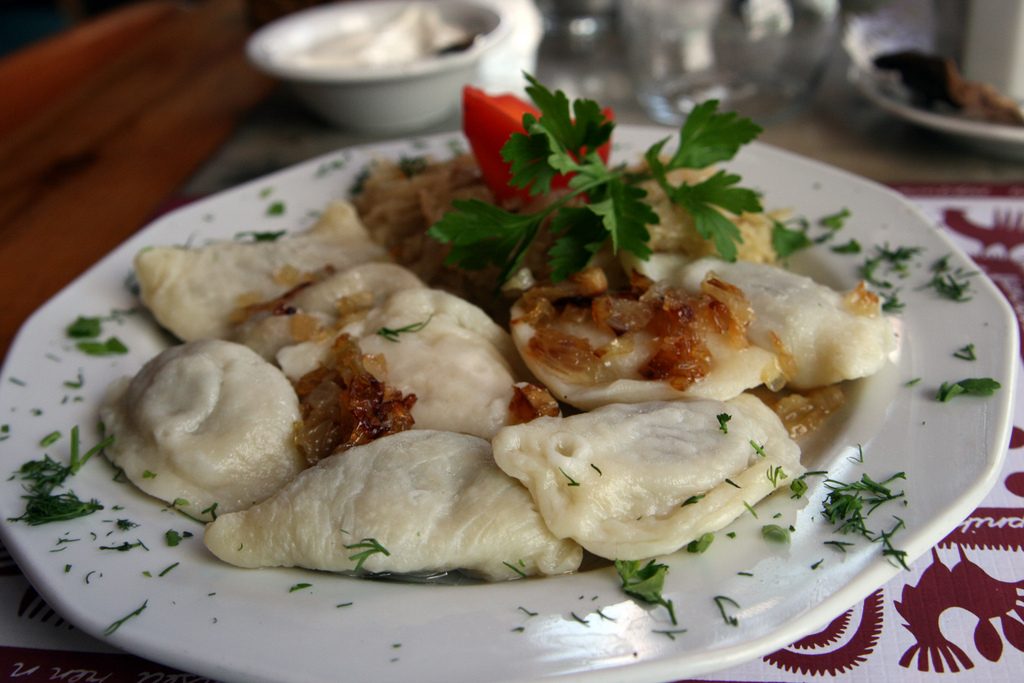 Anna Krasnopolska: “The most popular dish in Poland is filled dumplings called pierogi. They have a wide range of flavors, depending on the filling. We eat them stuffed with farmer’s cheese&potatoes, cabbage, sauerkraut, meat or mushrooms. But they are not always savory, in the same type of dough you can also wrap seasonal fruits like strawberries, cherries, blueberries, plums or just use a sweet farmer’s cheese.

Pierogi are well known in whole Poland and in Ukraine. They are usually cheap and you can buy them fresh in a delicatessen shop, or frozen in a regular supermarket. Yet, the best ones are obviously homemade. Unfortunately, preparing them at home requires time and wrapping skills. In many families, it has been a grandmother or a mother that made them. Nowadays, more and more young people try to experiment with fillings and flavors, making them vegan (with tofu and potatoes) or filling with spinach&riccota, buckwheat, etc.

Every year the Festival of Pierogis takes place in Cracow, where the best flavor of the year is chosen, and where you can try some surprising combinations.

Pierogi are present in every Pole’s life from early childhood. They are soft, tasty and it’s the favorite dish of many kids. My earliest memory related to this dish dates back when I was 5 years old. I was in our small kitchen with my mother, trying to help her while she was wrapping the filling into a dough. Obviously, it wasn’t so easy for my small hands. I kept on failing for a few minutes before I got frustrated and I started crying. She asked me why do I cry, and I answered: “I am already 5 but I still don’t know how to make my own pierogi!”. At that age it was already obvious to me that everyone should know how to prepare them at home.”

Gayane Akhperjanyan: “The national Armenian dish is stuffed grape leaves called tolma. However, Armenians who live in other countries call it dolma. The filling of minced beef with a little bit of rice, onions and a lot of herbs, such as coriander, parsley, etc., is wrapped in grape leaves and boiled in the water. Armenians serve tolma with a sauce made of sour cream and garlic. It is a very tasty dish and all Armenians prepare it at home, although, you can also try it at restaurants across the country.

I ate it since I was little as my grandmother and my mother prepared this dish on special occasions. It is a very old dish. I think it became the traditional dish because Armenia is a wine-producing country. We grow a lot of grape vines so people came up with the idea how to use grape leaves.

I learned to make tolma in my 20s when I was helping my mother to prepare it. It’s not easy as it takes some efforts to fold leaves properly.” 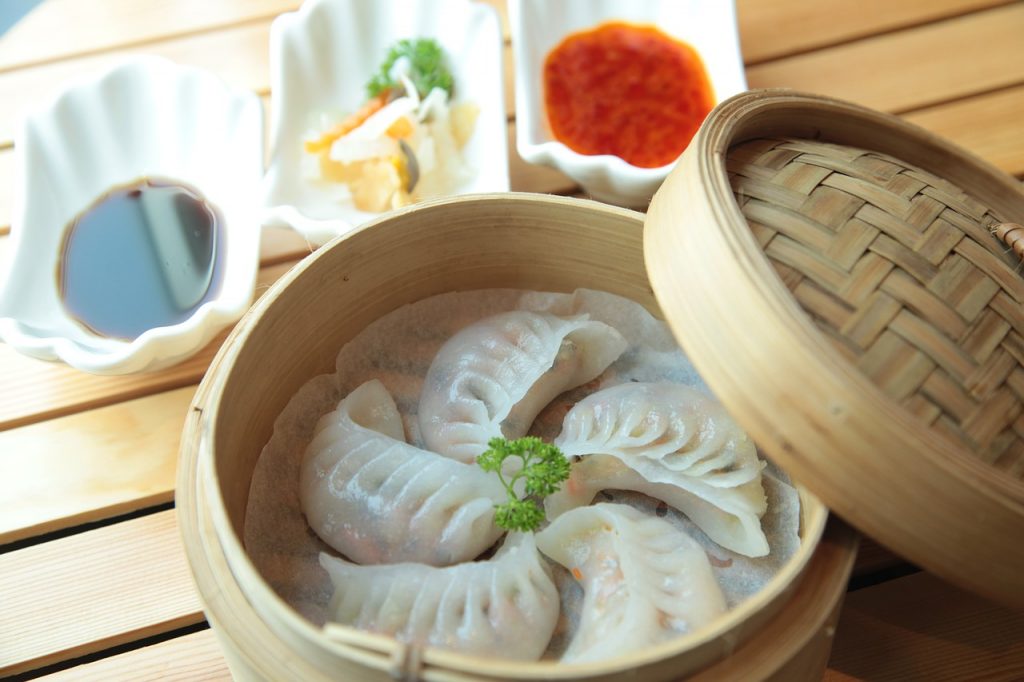 Hang Liu: “If I had to choose one dish, which the best represents the Chinese food, I would pick dumplings. A dumpling in Chinese is called “jiaozi”, which sounds the same as “the time between two years”. So most of the Chinese families eat dumplings during Chinese New Year and all year-round. We also make dumplings when we have some guests or during some festivals. 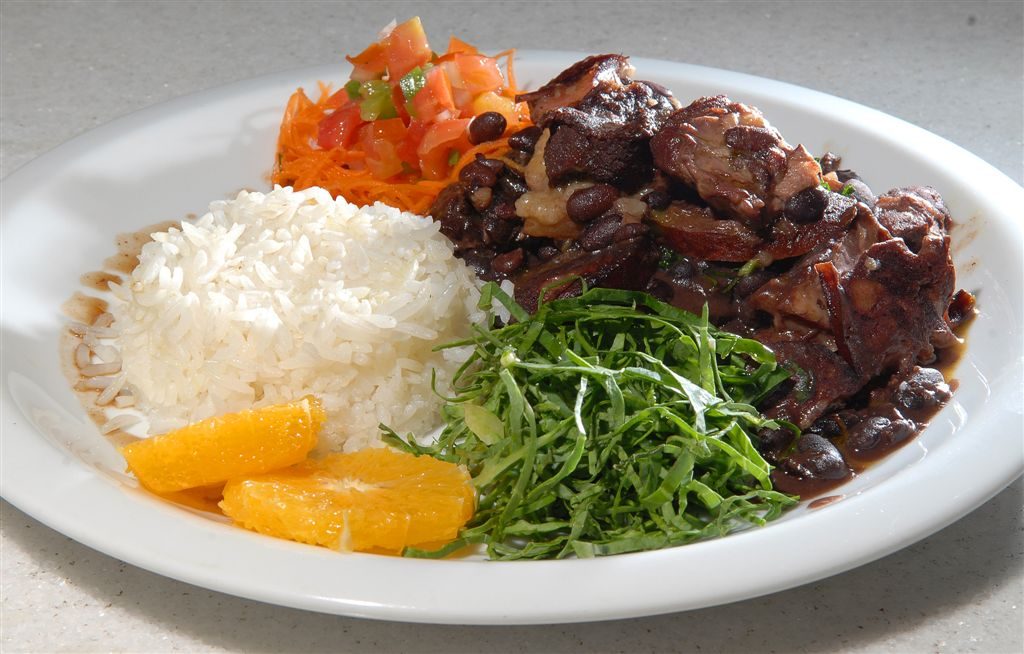 Nyedja Da Silva Marinho: “If there is a dish that people would call a Brazilian dish, it’s feijoada. It is a stew of black beans with salted and smoked pork and beef. Traditionally, people also add pig’s feet, ears, tails. It is served with rice, kale, and slices of orange. If it’s well done, it’s delicious!

You know feijoada since you are born as your grandmother, aunts – everybody makes it. In the past, it was widely believed that feijoada was created by slaves who used a meat that sugar cane owners threw away, like pig’s feet, ears, and tails. Now it is said that feijoada originally was a Portuguese dish adjusted to the Brazilian taste and ingredients.

My father loved feijoada, but my mother prefers lighter food, so it was my grandmother who used to prepare this dish. The first time I made this dish was in 2004 when I lived in the US at the multi-cultural student campus International house of Berkeley. When you live there you are supposed to share your culture with the other residents who come from all over the world. I prepared a good feijoada and invited Brazilians and all people who loved Brazilian culture. Even a Brazilian ambassador came to the party.

People normally make this dish for birthdays and gatherings. You don’t eat it alone at home. Brazilians usually eat feijoada while drinking a national cocktail caipirinha (made from a sugarcane liquor cachaça, lime juice, sugar, and ice) and playing samba. If you’ll ever have feijoada, caipirinha, and samba, invite me and I’ll be there!” 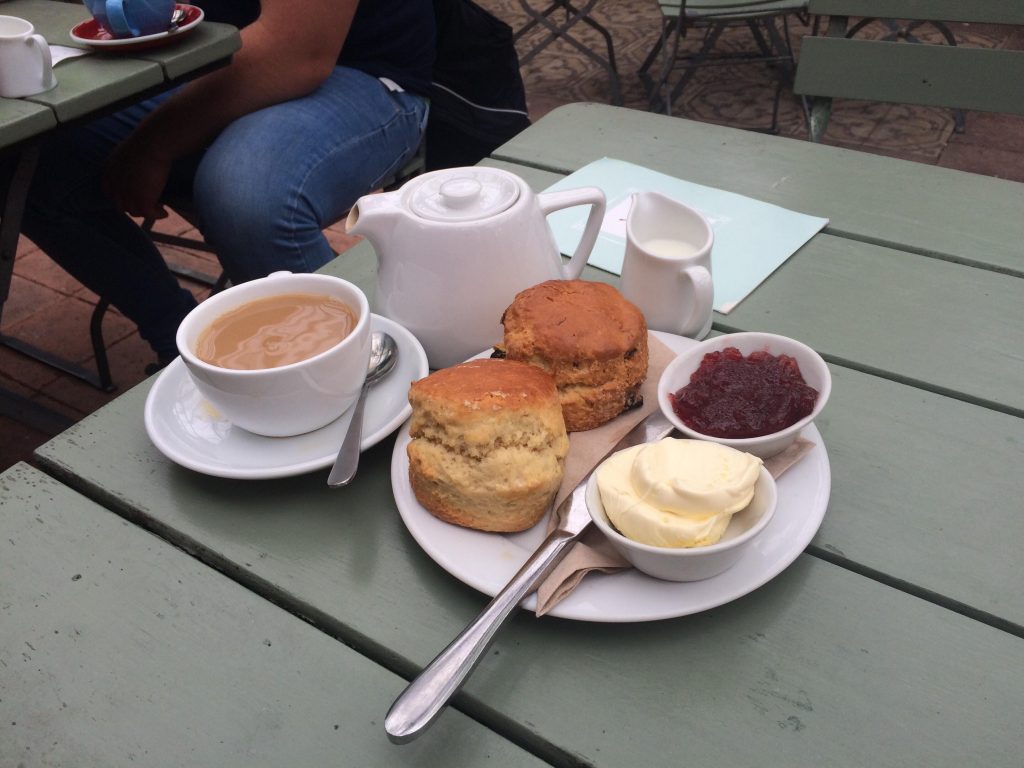 Jessica Sims: “You can prepare English cream tea at home, but people tend to indulge at a café or out and about. There are levels of cream tea, from homely to very fancy. It’s a bit of a treat, so it is eaten on special or rare occasions: reunions with good friends, birthdays, anniversaries.

If you’re making the scones from scratch then you have to have some skill in the art of bakery, but if not it’s easy to pile up a scone with some clotted cream and jam (homemade is best) and a cup of tea.

I went to University in Exeter, Devon; Devon has a very long history and close connection with the cream tea. Sometimes it is called the Devonshire Cream Tea. Devon and Cornwall are both English counties that claim ownership over the origin of cream tea, and there is an argument over how to prepare it. People in Devon spread the cream below the jam, whereas the Cornish lather their cream on top of their chosen jam. And it is a crucial difference! People feel passionately about their cream tea layers.

I have never made the scones myself, but I’ve prepared everything else for friends many times, when we feel like something special. English people are definitely proud of their Cream Tea, and it’s a traditional tourist taster.

I think it became the national dish because it’s easily made from local ingredients. Afternoon tea is a quintessential English pastime, so it’s unsurprising that the perfect accompaniment can be considered the national dish. What’s more, English cuisine is so incredibly multicultural that the majority of the dishes that embody the country’s taste trace their roots from elsewhere. Cream Tea is thoroughly British.”