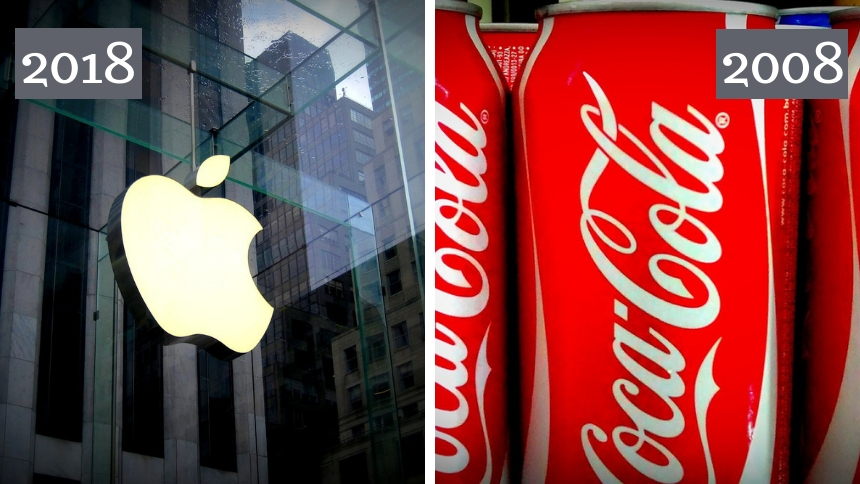 Apple has been named the world’s most valuable brand in 2018. However, in 2008 Coca-Cola reigned supreme.

The global business map is changing fast nowadays. So are the most valuable brands. Traditional industry companies that used to dominate the market for decades are forced to give way to young tech enterprises.

Apple is ranked the most valuable global brand in 2018, revealed the annual Interbrand Best global brands report. The U.S. tech brand that is valued at $214.48 billion has held the top position for the sixth year running. Google (valued at $155.5 billion) took the second place, while Amazon (valued at $100.8 billion) was ranked third.

Interestingly, ten years ago neither Apple nor Amazon made it to the top 20 most valuable brands list. In 2008 only Google came 10th, while Apple claimed 24th spot, and Amazon landed in 58th.

The value of the world’s top 3 companies has grown at a dramatic rate over the last 10 years: from 6 to 15 times. According to Interbrand calculations, 10 years ago Apple was valued at $13.7 billion, Google at $25.6 billion, and Amazon at $6.4 billion.

Although these American tech companies showed an impressive growth, Facebook recorded the biggest jump in a decade. The social network earned the 9th spot in 2018, while in 2008 it didn’t make it to the top 100. Samsung is another one fast-growing brand rising from 21st to 6th position.

Ten years ago the list of the top 3 most valued brands looked differently. Back then, enterprises that have been leading the market for decades claimed the top spots. World’s most chosen brand Coca-Cola, IBM, and Microsoft topped the best global brands list in 2008.

Although pushed down from the top, in 2018 these brands still rank high on the list: Coca-Cola is fifth, Microsoft occupies fourth place, while IBM is ranked 12th.

Forgotten brands that used to dominate the market

In general, the majority of the most valued brands of 2008 managed to retain their positions: 14 of them remained in the top 20.

Yet, some brands have disappeared from the prestigious list. The mobile phone brand Nokia rounded up the top 5 in 2008, but it didn’t make it to the top 100 in 2018. Nokia was a dominant force in a mobile phone market for years but lost it due to its inability to understand the changing consumer preferences, such as a touchscreen introduced by the first Apple’s iPhone in 2007.

According to the Interbrand’s report, today it is not enough to make people feel good about a brand by simply focusing on the storytelling around the benefits of a product or service.

“Leading brands are driven by their desire to be useful, to create products, tools, and services that actually solve customer problems, and to use their marketing to serve and not just sell. They are driven by a clear sense of purpose which is focused on creating meaningful, positive impact in the world. And importantly, they do this on a day-to-day basis, being continually at-hand and intertwined in their customers’ lives,” states the report.

Given these changes, the top list of the most valuable brands might surprise us in years to come. Especially, because new brands enter the list. In 2018 Spotify and Subaru made their debut on the list, whereas Chanel, Hennessy, and Nintendo reenter the table.

However, when it comes to the fastest growing brands, Amazon is still the top performer followed by Netflix, Gucci, Salesforce.com and Louis Vuitton.