The inventor of the first unmanned store R.Ilijason: „I give 15 years to the traditional supermarkets“ 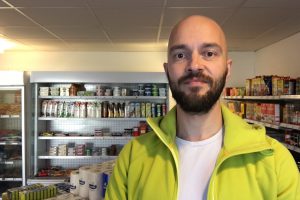 In the beginning of 2016 IT specialist Swedish Robert Ilijason opened the first world’s unmanned store in Viken, a small Sweden village.

The customer used mobile app, which identifies a person through his personal banking account, to unlock the store 24 hours per day, took the products he needed and scanned them through the app using his smartphone camera.

The invoice was sent at the end of the month. The innovative staff-less store attracted a lot of attention as the international media covered this story. After less than one year R.Ilijason sold his technology to the Swedish startup “Wheelys Inc”, but stayed as an adviser to help to create 2.0 version.

R.Ilijason talks with weekly “Veidas” about his idea of the unmanned store and the future of the retailing.

One year ago you opened the first unmanned store where customers did shopping using their smartphones. How could you describe the first year? Does this store still operate?

It went well, but I learned there’s a lot to do when you have a couple of stores. I actually opened two stores and then I decided I didn’t have enough time for them so I sold the concept to “Wheelys”. They closed the stores in Sweden and are now operating their first one in Shanghai.

Why the new owners closed the stores in Sweden?

Are you planning to open more unmanned stores in near future?

Personally, no. But I think you’ll see a number of stores based on my technology from several other companies. I’m planning on focusing on the innovation and a technical side of things moving forward. Now I’m a freelance contractor, working as an adviser for „Wheelys“. I’m helping them to build 2.0 version of the unmanned store, but as an external party. The biggest changes are about to come in a few months.

How many customers did you have?

When the stores were closed we had about one thousand customers which was a large part of the target population as we were operating in two small villages.

What was the feedback from your clients? How often did people come only to try how this innovative idea works?

The feedback was mixed. Actual customers were very happy but I got a lot of negative feedback from people who didn’t want to use smartphones for shopping. Some people just tried once but most returned.

How often did people try to cheat on this system? How many thefts did you register in the first year?

We didn’t have much theft at all and what we had could very well be accidents. That said, we had quite a few persons who didn’t pay their invoices which turned into an issue.

Your unmanned store was opened in a little village. Do you think this concept could work in big cities? Despite technologies which help to secure the goods, this kind of store is also based on the honor system and for people is easier to cheat when they don’t see any staff around.

I think it would work anywhere. As I’m sure you know Amazon is trying out something similar in Seattle which is a bigger city. I believe most people won’t steal and the ones that do won’t come to a store with camera monitoring and registration requirement.

In your opinion, what is the future of retailing? Do you think unmanned stores could totally replace traditional supermarkets?

The future of the retailing is e-commerce. Today we see more and more large grocery stores but I think we’re about to reach a peak-supermarket. There are two big things keeping web solutions from taking over. Firstly, we need to solve the last mile problem. Self-driving cars and drones (such as Estonia based “Starship”) will handle that in a few years. Secondly, we need a better way to order goods. Clicking like crazy on a website isn’t the solution for that. Things like “Amazon Alexa” and smart refrigerators are. Once that is in place the supermarkets will die. Fast. I give them 15 more years. So what about unmanned stores? Well, not everything will be bought online. If you’re thirsty even 10 minutes is a long wait and you don’t want to wait for a drone delivery. That’s where the unmanned convenience stores will come in handy. They will be mobile, smart and everywhere. The perfect complement to e-commerce.