Many Swiss farmers use honor system to sell their products. Here’s why 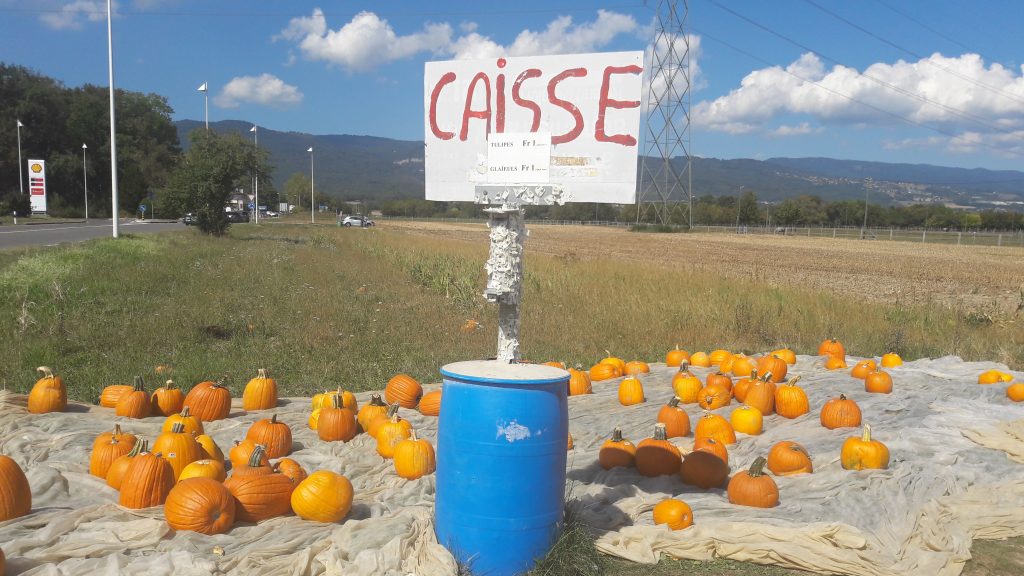 These pumpkins are sold relying on the honesty of customers. Photo: Jurgita Simeleviciene/Business Fondue

Take a drive through Switzerland’s countryside in autumn, and you’ll encounter one of the most fascinating country’s traditions: unmanned roadside stands selling seasonal fresh-picked vegetables and fruits.

On a sunny Sunday in September, when I was about to reach a small village Signy Avenex in the canton of Vaud in Switzerland, I spotted few dozens of pumpkins piled up by the road. A box with a big sign “Caisse”, what means “Checkout” in French, was installed in front of vegetables. Neither a vendor nor a guard or surveillance cameras were seen around.

That was it: an unmanned roadside stall that runs on the honor system I was looking for.

Roadside stands based on the honesty of customers is an old tradition that goes back many years. Farmers prefer to use the honor system stands instead of spending the whole day at farmers markets.

Unmanned stalls with vegetables can be found all over the world. Germany, Norway, the U.S., Australia, Canada, the UK are among the countries where the honor system isn’t any novelty.

This is how the honesty system works: at a Swiss farm stand near Signy Avenex, every pumpkin has a price tag on it. After a customer chooses a vegetable, he is expected to leave the right amount of money in the honesty box. An owner of the stand will come in the evening to collect the money.

Apparently, this stand serves longer than just a couple of weeks in September. The prices for tulips that are blooming in March and gladioli are placed below the honesty box.

While I was looking around, a car stopped nearby and a woman came to take a look. Christine, a German who lives in Geneva, said to Business Fondue that she has seen many stalls that run on the honor system in the canton of Vaud.

“Usually, they could be found near farms. Sometimes a knife is placed on a counter so that you could pick your own vegetables in a field,” said Christine. “However, often these vegetables are overpriced. That’s why this time I’m not going to buy a pumpkin. They are too expensive.”

This unmanned roadside stand wasn’t the only one I’ve seen that day. In several hours I found five places where products were sold based on the honor system.

Are the Swiss honorable enough for the honor system?

This sign leads to a farm where wood for heating is sold based on honor system. Photo: Jurgita Simeleviciene/Business Fondue

Next sign “Self-service” seen on a road in Signy Avenex took me to a farm where wood for heating was sold relying on the honesty of customers. Boxes with wood were placed in a shelter, and a small lockbox has been attached to a poll.

Christiane Baumgartner, the co-owner of the farm, said to Business Fondue that many farmers in Switzerland can sell products using the honor system because most people are honest.

“I think for the Swiss it is important to be honest. That’s why services based on the honor system can exist,” said Christiane Baumgartner. 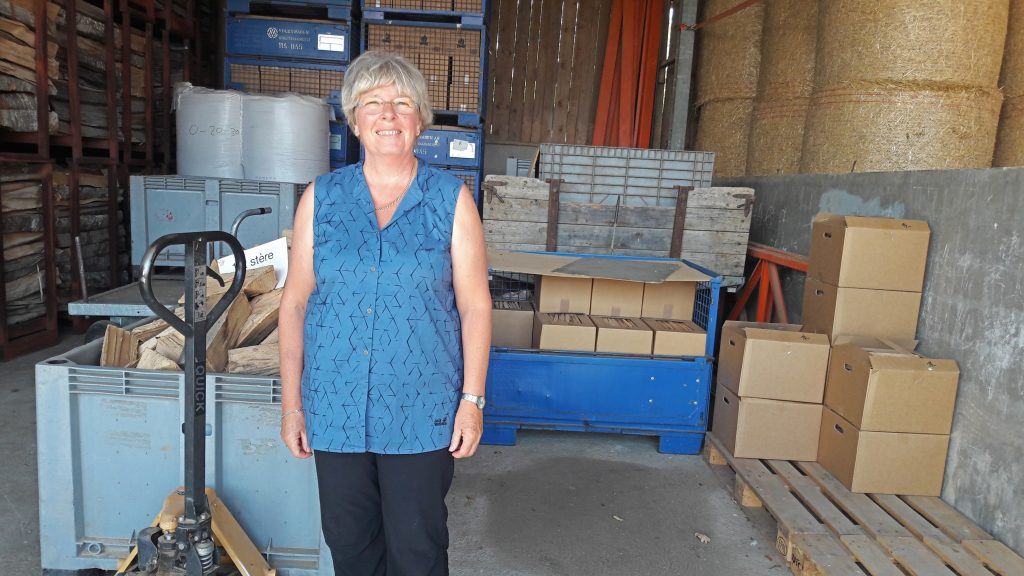 “For the Swiss it is important to be honest so honor system can exist,” said Christiane Baumgartner. Photo: Jurgita Simeleviciene

However, the thefts happen even in Switzerland. Baumgartner revealed that not everyone follows the rules and pay what they owe. Vegetable growers find it especially difficult to continue with self-service as they are robbed more often.

“Some of them even have started installing vending machines where goods are kept locked in small boxes and are unlocked after you put money. When it comes to our stand, thefts don’t happen frequently, so it’s still worth to keep using the honor system,” said the farmer.

However, she added, most of the Swiss cherish this tradition. “For a start, people like buying locally grown food. Secondly, there are no business hours, so customers can come when they want. Lastly, we offer more favorable pricing than in stores,” she explained.

Apart from running her own self-service store, Baumgartner buys many products from other local unmanned farm stands or shops.

“I buy cheese, fruits, vegetables, yogurt, cereal, bread, eggs. I trust that these farmers don’t use any pesticides. You can’t tell the same about the food sold in supermarkets,” said Baumgartner.

A local produce shop without any vendors 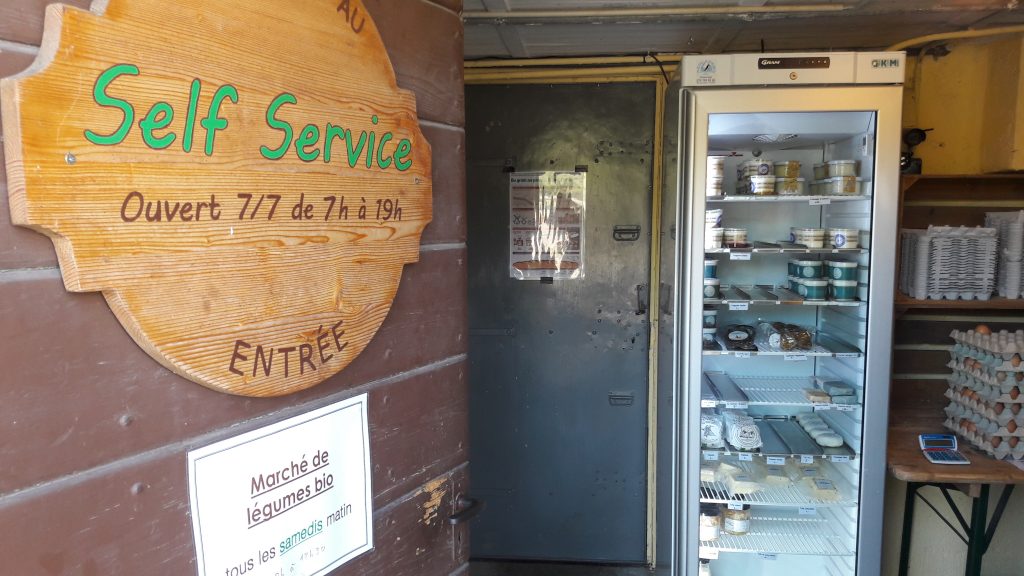 Unmanned farm stands filled with vegetables might sound like a great idea, but actually, the Swiss farmers went even further. Small shops without any vendors have been operating around Switzerland.

One of such shops operates in Coinsins village. Located in front of a spacious garden where hens are freely walking around, it has everything you might think of: cage-free eggs, boxes of freshly picked apples and pears, potatoes, tofu, pasta, honey, oil, homemade cookies, and even a fridge filled with yogurt, variety of cheeses and butter. 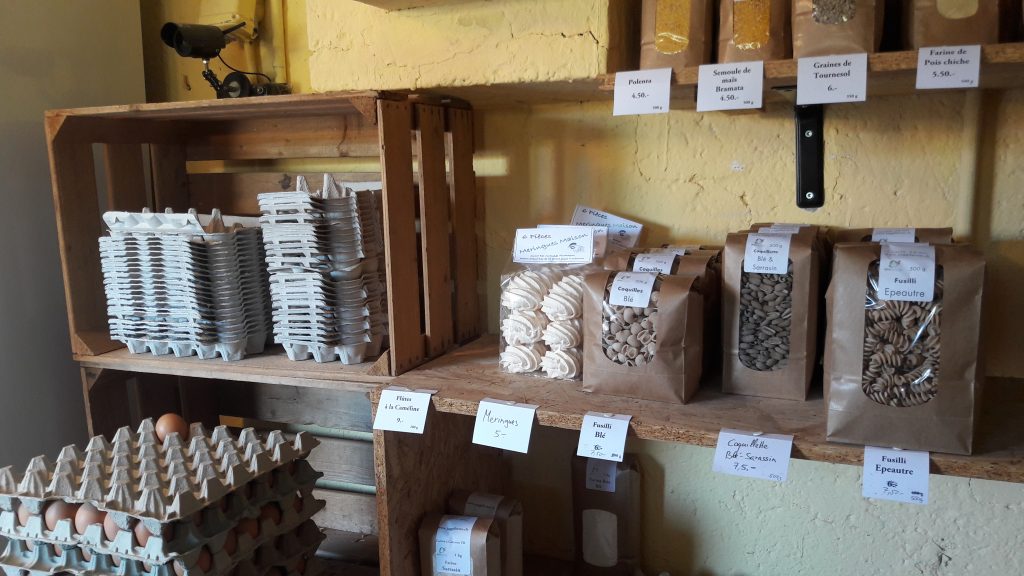 The scales that show not only the weight but also the price a customer needs to pay is placed on a table next to an honesty box. There is nobody to keep an eye on the produce, except for a video surveillance camera.

A local resident Heidi, who was shopping at the store, told Business Fondue that this shop has been operating for more than a year.

“I buy at this place because I want to help. Owners of this shop don’t have such support as big supermarkets,” explained Heidi. “Besides, it is very convenient as you come when you want and pick what you wish without talking to anyone.”

According to a business hours sign mounted on the door, this shop which runs on the honor system is open 7/7. By contrast, supermarkets in Switzerland are closed on Sundays.

Eggs of free-range hens is one more thing that attracts Heidi to this shop. “I don’t like when hens are put into cages and suffer from stress. Apart from eggs, I buy many products at this store: cheese, butter, yogurt (made from cow’s milk, not sheep), puffed wheat. Few times a week you can also buy fresh bread. And, of course, camelina oil is very good,” said Heidi showing around the shop.

After Heidi had weighed some apples and packed other goods, she pulled an eggs box from her bags and placed it with other containers on a shelf: “You need to return a box next time you come,” she explained.

What happens if a customer doesn’t have the exact amount of money to pay for the goods? “Oh, I usually have it,” explained Heidi smiling and showed a purse full of coins. “Once I actually didn’t have the right amount, so I put more and took an extra product.”

Like all the Swiss, Heidi appreciate the honor system. Once per week she also buys some vegetables that are stocked on an unmanned farm stand on a street.

“We have stands and shops running on the honor system everywhere. Many of them can be found on the German-speaking part of Switzerland as well,” said Heidi.

From tulips to grapes 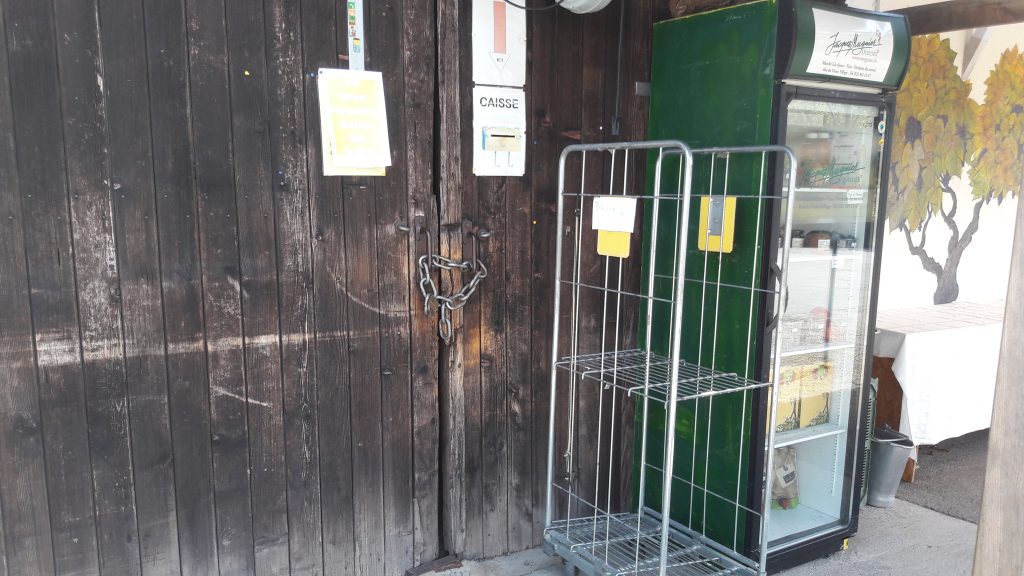 A fridge placed next to the wall of a farm is filled with wine, juice and fruits. Photo: Jurgita Simeleviciene/Business Fondue

Not far from a shop without a cashier, a fridge filled with local produce was standing next to the wall of the other farm. Bags of charcoal and black soil were placed nearby, and a hole in the wall served as a checkout. This unmanned fridge was stocked with apples, plums, wine, and juice. 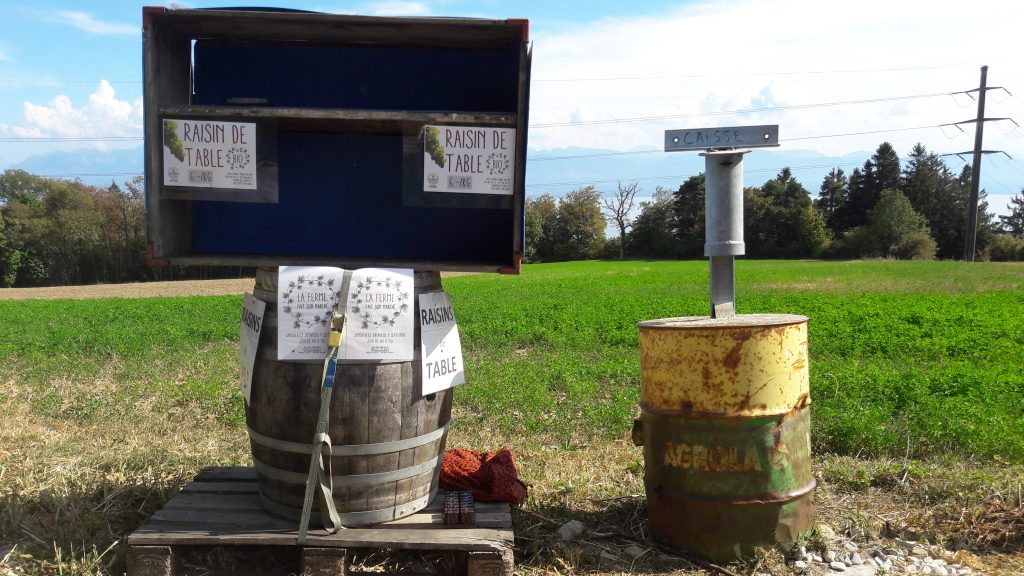 Grapes from an unmanned stand were already sold out. Photo: Jurgita Simeleviciene/Business Fondue

On a windy road to the popular parc Signal de Bougy un unmanned stand with grapes was waiting for its customers. 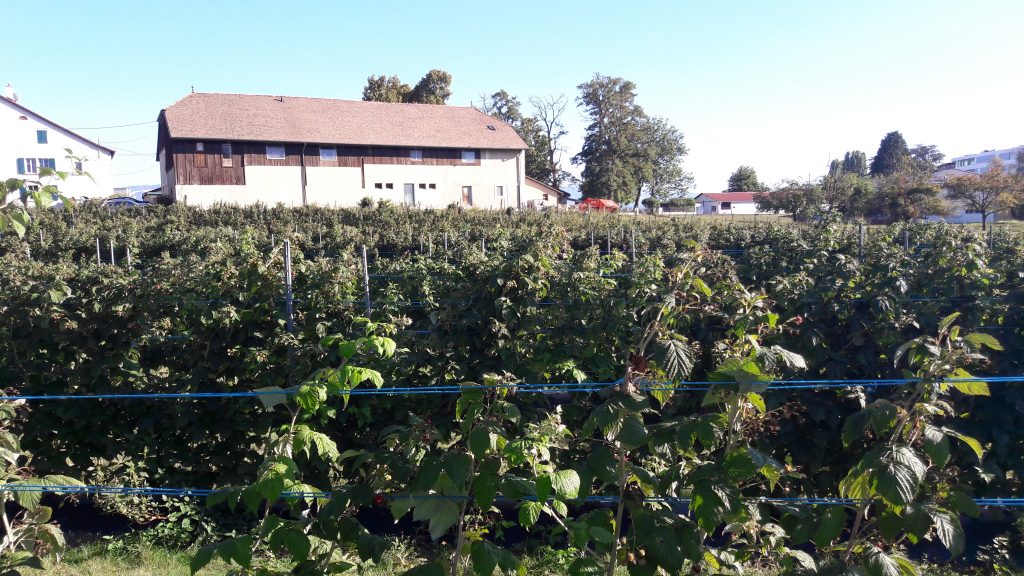 Whereas in Meyrin, a town with a population of over 21,000, the farm La Fraisiere offers to pick your own raspberries and blackberries in a huge field. Based just next to the road, this field isn’t surrounded by any fence. After customers pick their own berries, they go up the hill to the farm, where farmers weigh their fruits.

From spring to autumn the Swiss farmers sell many products based on the honor system. In early spring unmanned stands appear next to tulip fields. In summer, many farms are offering strawberry self-picking. However, September is the season when unmanned stalls can be spotted more frequently.

The honor system enables farmers to save some time and money as they can sell produce without spending all day watching over a stand or hiring a vendor.

As for customers it’s not only a convenient way to buy fresh-picked locally grown food, but also a feeling that you are trusted. It comes as no surprise that the Swiss hope to keep this tradition for many years to come.